The school faction system is organised to promote team spirit, pride and loyalty through various activities undertaken. Children are placed in a faction from Kindergarten and will generally remain in this faction during their schooling at St Helena’s. 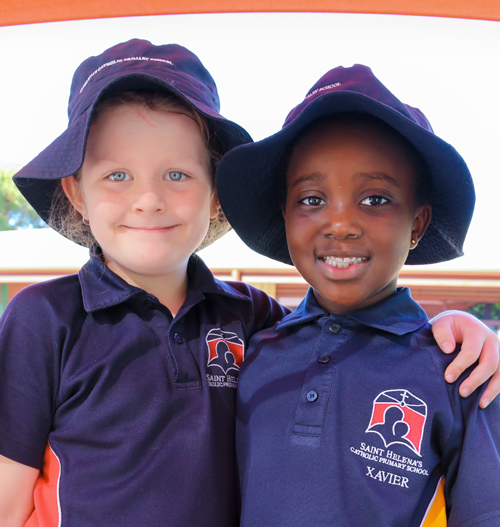 Ignatius Loyola was born in 1491. In 1521, Ignatius Loyola, the soldier, had his knee wounded in battle. While he was recovering from his wound, he began reading about Christ and the saints. He decided to become a “soldier of Christ”. At the University of Paris, Ignatius began to gather friends who wanted to serve with him under the banner of Christ. These young men called themselves the Companion of Jesus. People nicknamed them the Jesuits, and the order was known as the Society of Jesus. The Jesuits became famous as teachers and missionaries. They chose to live among the poor and teach children. Jesuits now work at home and abroad in many ministries such as in primary, secondary and tertiary education, pastoral work, social services and with refugees. Ingatius died on July 31, 1556.

Francis Xavier, born Francisco de Jasso y Azpilicueta on 7 April 1506, was a pioneering Roman Catholic missionary born in the Kingdom of Navarre and co-founder of the Society of Jesus. Francis Xavier was named Patron of Missions, and was considered the greatest. In Spain as a youth, he was a great athlete, a champion runner, and the leader in his class at school. He was also a true friend to those who knew him, but was greatest at loving God. He spent the rest of his life preaching Christ and baptising among the peoples of India and Japan, he died in 1592.

John Neumann was born in Europe on 28 March 1811 but went to New York and was ordained a priest. His first assignment was to work among the immigrants. Because he knew seven languages fluently, he could speak about God to many people in their native language. He was a hard worker, visited the sick, and comforted the needy and trained teachers. He became a Bishop and opened hundreds of Catholic schools, even though he was a bishop he still loved children and remained a teacher. He died on January 5 1860.

Mary Helen MacKillop was born in Fitzroy, Melbourne on January 15, 1842. When baptised six weeks later she received the names Maria Ellen. She was also known as Saint Mary of the Cross. She was an Australian Roman Catholic nun who, together with Father Julian Tenison Woods, founded the Sisters of St Joseph of the Sacred Heart and a number of schools and welfare institutions throughout Australasia with an emphasis on education for the poor, particularly in country areas. This great Australian woman inspired great dedication to God’s work in the then new colonies. In today’s world, she stands as an example of great courage and trust in her living out of God’s loving and compassionate care of those in need.